Start a Wiki
Todd, labelled the 'Over-the-top villain' is a contestant on Total Drama Alphabet and is a member of Team Moon.

﻿What's there to say about Todd? He's not a very nice guy. He's against victimless crimes, 'cause well, isn't having a victim what makes it fun? He tends to be very over the top and melodramatic about how evil he is, which some feel is meant to be hilarious... until he does something to them! Nothing is really known about his parents. Some say Todd killed them. Others say they're in hiding, in fear of their son. Still others say they're the secret heads of a secret evil organization bent on world destruction. Or mostly just Izzy who's saying that.

Todd is a little bit nuts. He is obsessed with being evil and boasts about how evil he is at any oppotunity he gets; he is also able to break the laws of physics a little because 'any villain can do that'. Todd is quite mean and likes insulting people but is capable of getting along with others if it suits him. He also seems to be quite clever; much more than he lets on. Todd is very melodramatic when it comes to evil.

In A is for Arrival Todd was the ninth camper to arrive. He immediately laughed evilly and pushed Zack off the dock to prove how 'evil' he is. He also admits he aspires to be like Dick Dastardly. Before the first challenge he throws food at Sadie and insults her. DJ however says Todd will be sorry if he does that again. Todd searches for boxes with his new 'minion' Hank. He quickly finds a box but uses it as bait over a hole. Rachel however gets the box and avoids the trap. Todd tries again and later manages to trap Bob and Percy though he loses the box but he cares little. Later on he manages to wrestle two boxes away from Yancy and Zack (though he does toy with them a bit) and gives one to Hank. Todd escapes the punishment shack and ends up on Team Moon.

In You cannot beat Air Man! it is revealed that Todd is sexist; however he has the sense to keep his mouth shut around girls. He also gains a liking for Nicole. She ends up kicking him in the balls. During the challenge Todd pretends to fall dead because he may not have had the chance later. He boasts about how evil he is and refuses to even try to defeat Skull Man / Gwen on the grounds that 'Villains don't attack other villains'. Team Moon finish in second and Todd is safe from being voted off. He also taunts Team Himalayas because they lost.

In A little help Todd selects Lindsay as his favorite contestant because he wants his own 'perky female minion'. He is instead given Katie which he is not very happy about. Todd pushed DJ off the cliff in part one of the challenge and was going to chicken out but Katie kicked him in the nuts and sent him over the edge. Because she didn't jump with him Todd was out of the challenge much to his annoyance. Team Moon won so Todd was safe.

In C Is For Dr. Clause Todd sets a camera in a room in the first place cabin so he could watch Nicole get undressed; nobody goes in the room so the plan fails. During the challenge Todd wastes no time in the dirty tricks department and brings Hank along for the ride. His first trap is a landmine that can knock someone out for a minute. It works on Candice and he quickly moves onto the next trap which he thinks is genius (and Hank thinks is stupid). His second trap is a billboard that advertises a fictional product so the victim will fall into quick sand. It fails to work. Todd's next plan is a laser with the button held down by a hotdog. This fails when Todd forgets to plug it in; when he does he gets fried by his own laser. His final plan is dropping a cage on someone. This succeeds and traps Candice. He lets her out when Isis arrives and says 'he's caused enough mayhem for one outing anyway'. Team Moon come second thanks to Stephanie so Todd is safe.

In Food So Plastic, It's Fantastic Todd says he and Hank did good in the previous challenge and Candice will want them now that they've 'earned her respect'. When Team Moon talks about what food to cook Todd suggests something slaughtered; and that he once had a steak so fresh that the animal it came from was still alive. Todd later notes that the steak looks 'carcinogenic' and likes that. He does nothing else but since Team Moon wins he is safe for another day.

In Factor Phobia Todd laughs at Quincy's fear of public speaking and says that he cringes at the thought of doing good. Later on he ignores the challenge and instead paints a tunnel on a rock (like in a roadrunner cartoon) though Hank says that doesn't usually work in real life. Todd says in the confessional that the key word is 'usually' and laughs evilly.

In Stop That Pigeonholed Villain! the challenge is to stop Todd's evil plan. He builds a Lasinator that, obviously, fires lasers. He also explains girls to Hank and says they should get in a fight so he can win a girl's attention. He also says that some girls go for the losers instead of the winner so either way Hank would get a girl. He easily defends himself against Team Amazon as though they were not there. He is soon hit by Katrina who fired herself out of Team Himalayas' catapult; when he tries to hurt her Rachel throws a shoe at him. When Stephanie and Jennie destroy his Lasinator he attempts to attack them but as soon as Stephanie hurts him (very lightly) he goes down. Because of this Team Moon wins again. Todd admits in the confessional that the Lasinator wasn't his evil plan; his evil plan was actually taking a dive to ensure his team wins and that it worked. This shows that when he needs to be Todd is quite clever.

In My Life As A Teenage Health Nut Todd fires a mud ball at Rachel during the night and laughs about it. Todd enjoys the chicken killing challenge and off screen he shoved a dead chicken into Jennie's face. He also admits he's a fan of factory farming because of the suffering the animals get. After Team Moon win the challenge the challenge at night Todd is in the woods and a mysterious figure (who is currently unknown) approaches him and asks for his assistance. After being bribed with a thousand dollars Todd agrees to do some kind of evil task.

In Triskaidekaphobia Todd enjoys seeing a kitten stuck in a tree until he is told that it is his challenge. He initially refuses due to being a villain and getting laughed out of next year's 'villain convention'. Stephanie forces him to do it and Todd manages to do so; though he is disappointed the kitten didn't make a splat when he threw it to the ground. He also threatens to give Stephanie an ugly haircut in her sleep and says her comebacks are lame. Todd also thinks Stephanie would be a good villain. He believes that Quincy's speech was so boring that it could be a good weapon. When Stephanie refuses to face her fear of being nude for an audience Todd says he wouldn't mind seeing as beggars can't be choosers. He angers Stephanie by calling her ugly. Team Moon wins and Todd is safe. After the challenge he uses knockout gas to kidnap Katrina and Mallory. He admits in the confessional that it's nothing personal but he likes money ... and that it's fun.

In Sandcastle Hassle Todd brags about the 'evil deed' he committed the previous day; he also says he swapped the butter for margarine. He gives the others a subtle hint on what he did (Rachel figures this out). When the challenge is announced to be building sandcastles Todd declares he will kick down the other teams' castles but Bridgette tells him that would make his team lose. In the confessional Todd tries to think of a way to get around the rule. Todd starts to manipulate Bob into going against Ophelia and admits he makes it so easy that it's almost not fun. He enters Ophelia's GIANT sandcastle later and wonders how it is supporting it's own weight; he pukes when Ophelia forcefully feeds him sand pizza. Todd wonders how Ophelia can't make pizza yet can make delicious plastic cubes. Later on Todd gives Bob a detonator and dynamite to blow up Ophelia's sandcastle with. In the confessional Todd mentions that he will miss Bob when he is likely voted off due to him being so easy to manipulate. When Katrina and Mallory escape the place he took them Todd is angry but says he had to give them a 'sporting chance' and that the 'mystery dude' wanted a window for some reason. Overall Team Moon comes second so Todd is safe from being voted off.

In Talent Trouble Todd is annoyed that his kidnappping plan went wrong. However; he says it isn't his problem as he still got paid. Todd's talent is revealed to be making evil inventions from spare parts in a matter of minutes; however he isn't picked for the show. He was amused at everyone's reacting to Quincy's bad hip hop but regretts not bringing earplugs. At the talent show he agrees with Rachel that Jennie's talent sucks though Stephanie shusshes him and calls him a peasant. Todd later laughs at Stephanie after she is magically (and painlessly) sawn in half by Elizabeth. When Mallory tells a scary story Todd is seen in a fetal position sucking his thumb. Todd agrees when Veronica says they should vote her off since 'they wouldn't want to hurt her feelings and go against her wishes'. Todd is disgusted with himself for liking Veronica's opera singing and swears that he was brainwashed. Team Moon comes second so Todd is safe again.

In Unfair Funfair Todd asks if the challenge is to sabatarge the rides and cause grave injury. He is later seen riding a kiddie carosal on a horse he named 'Rarity'; he also laughs when the rollar coaster that Katrina was on crashed. He then tells 'Rarity' to giddy up. In the confessional he tells the audience to not judge him. Todd later tries to win a rifle at the ring toss. He misses with the first two hoops but then cheats with a special hoop he custom made. To his dissapointment the rifle that he won is a water gun. He fills it with maple syrup off screen and squirts it at Katrina. At the end of the challenge is it allegedly revealed that Rachel was the person who paid him to kidnap Katrina and Mallory (though this makes little sense). Team Moon come second and Todd is safe again. 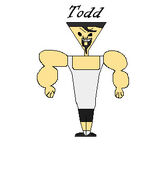 CragmiteBlaster's drawing of Todd in MS paint
Add a photo to this gallery
Retrieved from "https://totaldramaalphabet.fandom.com/wiki/Todd?oldid=4961"
Community content is available under CC-BY-SA unless otherwise noted.